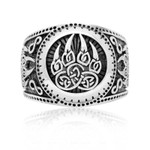 The conifers in the impenetrable forest are mixed with the smell of wet stone and soil. A human figure is wandering in the dark woods. The moon is blazing in the dark blue sky, projecting silvery beams of light among the sleepy ferns. The figure stops. The last pawprint! He has been following them all night, feeling the presence of wolves, foxes and vipers lurking in the blueberry sprigs. But now he is at the end of his journey. He raises his eyes and sees a huge stone decorated with paintings loom up in front of him. In the moonlight, the stone seems to have the face of an ancient bear. Sacrifices have been made to the stone: it has been both feared and coveted. The figure kneels. “I do not know why the magical pawprints were signalled to me in the middle of a copse, but I left my warm cottage and merrily singing companions and followed the tracks. Now I am here. Your will be done”, he says. At that moment, a strange light glints on the surface of the stone. Bravely, the figure steps forward. He understands: a pendant. It is silver with a pawprint in the middle – the seal of the majestic beast. The figure raises the jewelry to his neck. Now he knows. He has been chosen to wear the power of the bear.