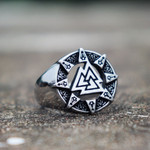 The wind is swaying the age-old pines and firs. The hooting of an owl can be heard from the woods. A campfire is crackling. The oval-shaped buckles on the maiden’s dress are gleaming in the light. She closes her eyes and waits. A sudden crack is heard in the dark. The maiden opens her eyes. She lights a torch, in case it is a wild animal, and holds it out towards the edge of the forest: “Who’s there?” she shouts. The rustling sounds come closer and closer. Then a man steps into the firelight. The maiden immediately recognises the cape, the plaited moustache and the shoes laced by a local tanner. She lets the torch drop from her hand and runs into the arms of the man: “You’re back!” Later that night, after the man has told all there is to tell about the border waters of Harald Bluetooth, the angry sea winds and the riches of conquered monasteries, he asks his maiden to close her eyes and steps behind her. The man pushes her long locks away from her neck and opens his fist. A piece of jewelry emerges from it. The man ties it around her neck. The silver has become warm in his hand and feels pleasant on the skin. The man says: “Accept this piece of jewelry, in memory of the fallen and to tie us together. When you carry it, you will bear bravery, truth, honour, loyalty, discipline, generosity, self-sufficiency, a sense of duty and survival with you.” The woman turns and sees the same kind of jewelry on her man’s chest. And they sit by the fire until morning – until the fire burns down to red cinders, the hoots of the owl fade and the rising sun chases the stars from the sky.